In 2023, Winchester Youth Counselling will celebrate its 20-year anniversary, but where did it all start? In 2001 Jill Guppy & Stuart Gemmell put forward the idea to start a counselling service that provides free, longer term, open-ended counselling in Winchester. We spoke to Jill about what led them to form the charity, and the challenges they met along the way, and the success its achieved.

“My background was in youth and community development work. That’s what I did before I went on to train as a counsellor and through that I helped other communities and young people set up things like a skatepark in Winchester in the late 80’s / early 90’s.At the time, I knew nothing about how to build a skatepark at all. And the young people had shown me this secret spot as they called it, which was this skate ramp that they built, illegally I guess, under a bridge near Winchester somewhere out in the middle of nowhere because there were no skatepark facilities in the area at that time.

From a Surfboard to a Skateboard…

“I was keen on surfing and skateboarding was closely associated and, because these kids were so keen on skateboarding, I used to take them down to Southsea when I was doing detached youth work and they were buzzing every time that they’d gone to Southsea and they said, we want one of these.

OK, I thought, but where do we start with that? Where would we put it? I saw their passion and knew we needed to help them do something with this and eventually we got some ramps down at North walls. I don’t think they’re there anymore. They were all taken away by the council, but I think it was the basis of the current skatepark.

The first thing we were told when we presented this idea to the council was that it’s a craze and it will go away and I said no, I don’t think it will because, Captain Cook was surfing in Hawaii, back in the day and surfing has continued. Eventually, I think it’s paved the way for many more skate parks and then the councils realised they needed to put in free skate parks for young people. “ 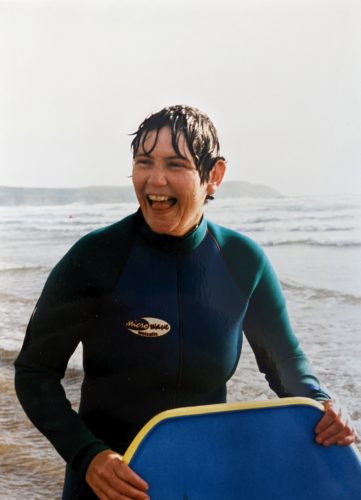 Getting to grips with Counselling

“When I did my counselling training, I was working at Face to Face which was run by Hampshire Youth Service and the authorities were saying, young people can come in, but they can only have six sessions and then that’s it, because we’re not doing therapy, we’re doing solution-based stuff and I said, but it is therapy. You have a counsellor who’s sitting in a room with somebody, so six sessions are not enough at all.

This is just a disservice to young people. This is not even giving them a chance. There was no way they could go and get private counselling. There was no psychotherapy department in Winchester. I met up with Stuart, a mental health nurse at the adult community service, and he was finding the same, it was like six sessions and out the door. We tried for a long time to convince the authorities to change that culture, to change that position and they wouldn’t.

We were hitting our heads against a wall here and then the idea struck. The only way around this block in the road is to create something ourselves. Stuart looked at me like I was mad and wondered where do we start? I didn’t know where to start with the skatepark, but I did it and I believed we could do the same with this.”

Jill and Stuart realised that if they shared the same idea, it’s likely other people will too and so the first thing they did was advertise a meeting to draw people together and see what people think. The meeting was held in a room at what was the adult community mental health unit on Romsey Road, Winchester and about 20 people attended. A lot of people didn’t think it would work and questioned how they would do it to which Jill responded, “We’ll give it a go”.

A few interested people joined together and in 2001 a committee was formed to start formulating the process of becoming a charity and getting money from somewhere. The committee of about 4 or 5 people met very informally in people’s houses to begin with where they focussed on proving the need for the service. The committee wrote to local GP surgeries and asked how many young people they were seeing who were coming in for mental health issues as opposed to physical. Most of the surgeries replied at the time saying at least one in ten people that come through the door needed mental health support.

The committee then started the process of getting charity status and the first thing they needed to do was raise £1000. Stuart did a sponsored skydive from 10,000 feet which raised the money needed to become a charity and by 2002 they had charity status. They were then able to open a bank account and began applying for grants and planning what to do next.

They wanted to provide longer-term, open-ended counselling so that young people will have a bespoke service in Winchester. It was important to+ Jill that they employed counsellors on an appropriate pay scale that recognised their experience and that they were given weekly supervision because Jill could see the amount of support that counsellors need when dealing with this age group because it is high risk. Jill said “If we are going to do it, we were going to set the standard”.

It was important to all that the service was focussed on quality as opposed to quantity. We still provide weekly supervision to all our counsellors to this day.

It took a long time to get the funding approved but the charity received its first funding through the Community Fund which funded them for 3 years in one go which allowed them to employ counsellors and to find premises. Their doors officially opened in April 2003, and they held an opening ceremony with the mayor of Winchester at Abbey House. This was the only time the charity has not had a waiting list.

WYC is now based in The Winchester Centre at 68 St George’s Street and is led by our new CEO, Erin McMurtry with Jill providing valuable nature therapy and walk & talk therapy as part of a broad range of free mental health services for young people. The charity continues to grow in the continuous effort to provide free, professional, open-ended counselling and therapies for young people aged 11-25 in Winchester. The organisation receives less than 10% of its income from statutory sources and the remainder is generated through Trusts and Foundations, and the generosity of Individual donors such as yourselves.

Visit our donations portal to make a one off or monthly donation to WYC and help us to provide our service for free. Thank you for your support!